The restaurant is part of British Four Seasons Chinese Restaurant chain, the first branch of which was established in Queensway, West London in 1990. 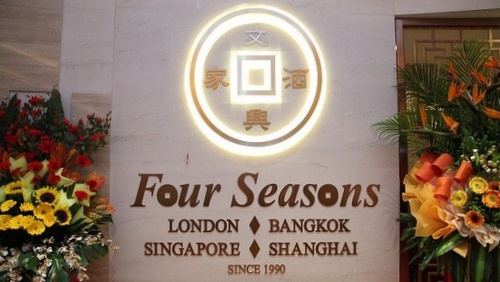 Four Seasons’ signature menu item is their roast duck, which has been lauded, for example, by the Financial Times as “The Best Roast Duck in the World”.

The roast duck dish takes a great deal of resources to make, and the details of the preparation, as Four Seasons does it, are the key to a perfect roast duck dish.

In the preparation process, the duck is thoroughly dried before it is marinated with a special Four Seasons mix of spices and herbs, and then, the actual heating is done in a purpose-built roasting furnace, which distributes the heat evenly, resulting in a golden crispy outer skin.

Apart from the roast duck, the menu is exquisite, which is why the restaurant is one of the favorite Chinese restaurants in Singapore among countless food connoisseurs, food critics, and culinary magazines.

To learn more about the Four Seasons Chinese Restaurant chain and the available range of dishes on the menu, the best place to go to is their official website.

The official website, at www.fs-restaurants.co.uk, also has a image gallery of the dishes and a contact form if you have further questions.