Each of the HAKO stores rents out small boxes that anyone interested can rent to sell products of various kinds that are fit to display.

HAKO shops are operated by Simply Toys, founded in 2001, the first company to introduce the locker sales concept to Singapore.

Over the years, the company has become one of the biggest movie prop and replica retailers in the country.

The company has outlets in recognized major malls, and coupled with a strong merchant network has made HAKO and its sister company Toy Outpost among the leading brands in the locker rental business.

HAKO is a 100% consignment shop, meaning that the lockers are rented out to anyone who wants to sell authentic & licensed products that are legal to sell in Singapore.

Monthly rental rates for the lockers depend on the size and location of the locker in question. 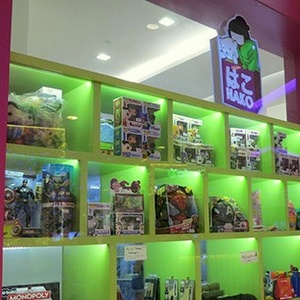 The stores are popular among people of all ages, but especially young adults, tourists, families, and working adults.

HAKO / Toy Outpost has an official Facebook-page at www.facebook.com/ToyOutpost/.

The Facebook-page is used by the company, for example, to inform customers about new products and promotional campaigns.